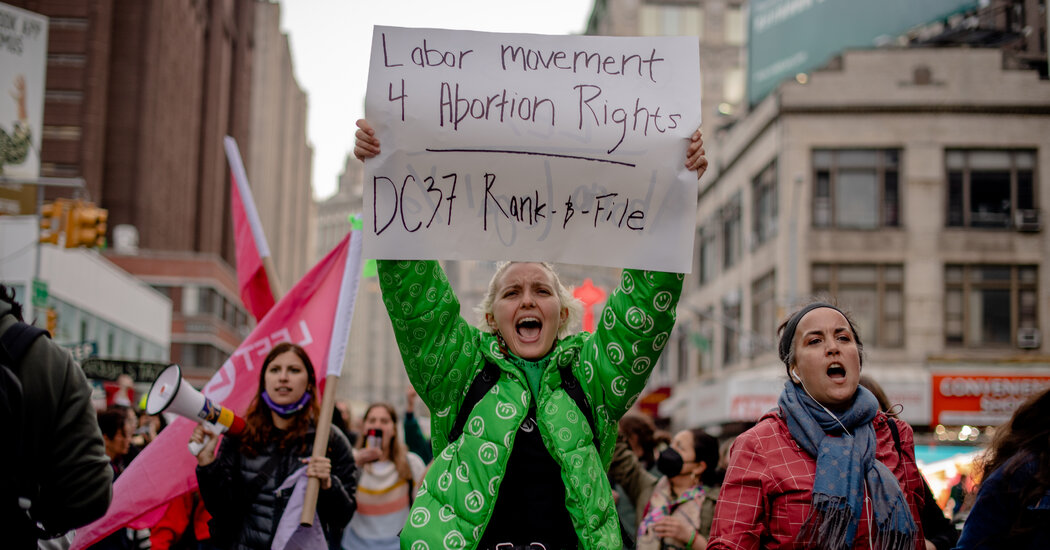 After a Supreme Court draft ruling showed that Roe v. Wade may be overturned, many of America’s corporate leaders reacted with silence. Abortion is a business issue: Women make up more than half of the work force, and those who were unable to get abortions were less likely to be employed full time six months after denial of care, according to a 2018 paper.

But abortion is also one of the most divisive topics in American politics, and the state of public opinion on the issue is complex. Most Americans support at least some access to abortion, and most support restrictions that Roe v. Wade does not permit. Companies choosing to offer new policies to support employees seeking abortions — or choosing not to — risks dividing customers, employees and clients.

That may explain why, so far, many companies remain muted. Although Apple, Amazon, Citigroup and Yelp are among those offering to cover some costs for employees who need to travel out of state for an abortion, other companies had no comment yesterday about the Supreme Court draft opinion leak. They include: PricewaterhouseCoopers, Oracle, JPMorgan Chase, Walmart, Disney, Meta, Airbnb, ThirdLove, Patagonia and Kroger. The Chamber of Commerce declined to comment, and the Business Roundtable said it did “not have a position on this issue.”

Some companies, like Levi’s and OkCupid, and executives have spoken out. In a statement to DealBook, Levi’s said that restricting access to abortion would have “far-reaching consequences for the American work force, the U.S. economy and our nation’s pursuit of gender and racial equity.” The company added that the end of Roe would “jeopardize workplace gains women have made over the past 50 years, disproportionately impact women of color and force companies to implement different health policies for different locations.”

(Sheryl Sandberg posted on Facebook that “this is a scary day for women.”)

In certain states, big companies are increasingly finding themselves at odds with Republican leaders. Several of the 31 states that have introduced abortion bans this year have sought to attract companies with low tax rates. Last year, Texas enacted a ban on most procedures after about six weeks of pregnancy. In Florida, Gov. Ron DeSantis, a Republican, signed into law a ban on most abortions after 15 weeks of pregnancy. These states also have a track record of pushing back against companies that take a political stand on issues like local abortion laws. A Texas state legislator warned in March that he would seek to prevent Citigroup from underwriting municipal bonds in the state unless it rescinded its policy of covering employees’ travel expenses for abortions.

Companies may start treating reproductive health as an employee benefit to attract talent. “We want to be able to recruit and retain employees wherever they might be living,” Yelp previously told DealBook. But that search for talent is complicated. Restrictive abortion laws have the biggest effects on low-wage workers, who cannot as easily afford to travel out of state for an abortion, many of their employers, such as at Walmart and Kroger, are headquartered in Republican-led states. “If they’re facing enough of a labor shortage that they think it’ll matter in terms of hiring people at the rate that they want,” said Amanda Shanor, an assistant professor of constitutional law at the Wharton School, “then they might do something.”

The Federal Reserve is expected to raise interest rates today. Most economists are predicting half a percentage point increase, which would be the first time since 2000 that the central bank has raised interest rates by that much in one meeting. Some on Wall Street are questioning the Fed’s ability to curtail the recent uptick in inflation without sending the economy into a recession.

The Trump family business pays $750,000 to settle suit with Washington. The District of Columbia claimed that the Trump International Hotel had accepted excessive payments from the former president’s inauguration committee, a nonprofit, in part to host a private event for his children.

The S.E.C. is investigating the Chinese ride-hailing giant DiDi. The company said the agency was looking into its $4.4 billion I.P.O. in the U.S. last year but did not provide details. The scrutiny comes as American regulators consider delisting Chinese businesses publicly traded in the U.S. for failure to share financial audits.

The State of Jobs in the United States

Job openings and the number of workers voluntarily leaving their positions in the United States remained near record levels in March.

Starbucks plans $1 billion in wage increases and investments in its stores. However, the wage increase won’t apply to stores where employees have unionized, the company said, explaining that it will need to negotiate deals with the unions involved in those stores. The initiative was announced as labor organizers have won initial votes at more than 50 stores, including several this week. Some labor lawyers argued the move amounted to a pressure tactic that might be illegal.

Biogen distances itself from a high-profile Alzheimer’s drug after a disastrous launch. The company is seeking a new chief executive and will effectively give up on marketing Aduhelm, which comes with unproven benefits and serious safety risks.

Silicon Valley takes out its ax

After a few years of healthy hiring, Silicon Valley might be set for a bout of belt tightening. In the past two months, a number of start-ups, including Better.com, Gopuff, Blend and Robinhood, injected doubt and uncertainty into what appears to be a strong job market.

Tech companies are feeling the squeeze from Wall Street. As the stock market has fallen this year — and the traditional sources of funding, like I.P.O.s, and nontraditional sources of funding, like SPACs, have dried up — start-ups are beginning to rethink how much money funders will give them before they have to turn a profit. That has made a number of Silicon Valley start-ups more cost conscious than usual.

No wave … yet. Tech industry recruiters and investors tell DealBook that while hiring has been paused and job cuts are still rare, more layoffs can be expected. “Layoffs are just starting,” said Gregory Becker, the chief executive of Silicon Valley Bank. “But my view is that you are going to see more of that.”

Public and private investors are “spooked,” said Stephen Clements, the chief creative director of Y Media Labs, who has worked in Silicon Valley for about 18 years. “And the money is therefore drying up.” Eugene Lupario, president of SVS Group, a staffing firm with several offices in the Bay Area, said some of his clients had been negatively affected by supply chain disruptions. Even when supply chain issues don’t impact the industry directly, Lupario said the disruptions overall had changed investors’ behavior and appetite for risk.

Huge hikes in compensation aren’t “sustainable.” Because of talent shortages, wages are growing at a breakneck pace in the tech industry, and workers have increased bargaining power. But “it’s not sustainable,” Lupario tells DealBook, and employers “are hitting their limits.”

Nonetheless, some pockets of the tech industry continue to hire. The segments that appear most immune to layoffs, or even hiring freezes, are artificial intelligence, machine learning, software security and health-care-focused tech start-ups.

“Let us be clear: It will not be easy. Some member states are strongly dependent on Russian oil. But we simply have to work on it.”

—Ursula von der Leyen, the president of the European Commission, this morning on the bloc’s new plan to ban Russian oil imports.

Board diversity may be losing momentum

In the weeks and months after the murder of George Floyd in 2020, calls for racial justice pushed many companies in the U.S. to commit to redoubling their efforts on racial equity. But nearly two years later, the momentum for more diversity at the highest levels of corporate America appears to be fading, according to an annual report on the board composition of large companies released this morning by the executive search firm Heidrick & Struggles.

Black people made up just 15 percent of newly named directors of Fortune 500 companies in the second half of last year. That was down from 26 percent for the whole year, and 28 percent in 2020. The number of Hispanic board appointees rose in 2021 to 6 percent from 4 percent the year before.

There was some good news on diversity efforts. Women made up 45 percent of all board appointments last year, up from 41 percent the year before. Among all directors, new and old, the number of female board members of Fortune 500 companies rose to 29 percent last year, up from 19 percent in 2015. “We expect that more progress will be made on diversity, equity and inclusion when diverse directors hold more influential board positions,” Lyndon Taylor, a partner at the search firm, said in a statement. “But this will require that boards take on a comprehensive perspective on diversity.”

Best of the rest

We’d like your feedback! Please email thoughts and suggestions to [email protected]