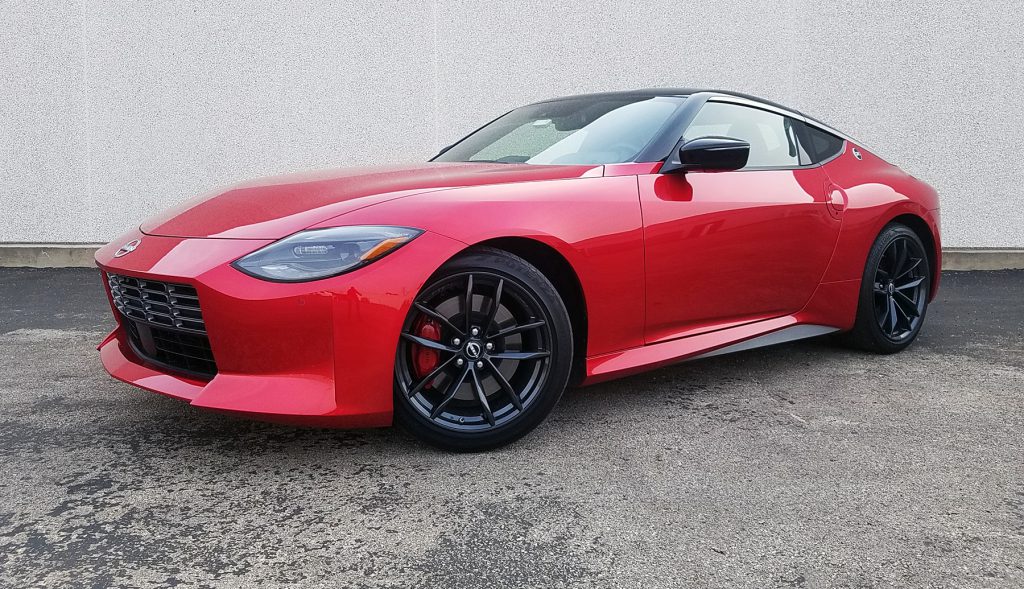 It’s tough out there for traditional sporty/performance cars these days, especially for the true two-seater or 2+2 sports cars. The things just don’t sell like they used to American shoppers, and as a result, the automakers who are still sticking it out in this segment have had to get creative. Toyota partnered with BMW to revive the Supra for 2020, and renewed its partnership with Subaru to introduce a new-generation version of the Toyota 86 rear-wheel-drive sports car (now dubbed GR 86) for 2022 (Subaru’s variant continues as the BRZ). Mazda partnered with Fiat to share some of the load for the 2016 redesign of the MX-5 Miata; Fiat got its own version in the revived 124 Spider, which only lasted through the 2017-2020 model years before it was dropped.

Nissan is sticking it out in the segment too, with the introduction of a redesigned Z sports car for 2023, and the company’s solution to the potential-sales-versus-development-dollars dilemma is to follow the same basic strategy it did with the recent redesigns of its Frontier pickup truck and Pathfinder midsize SUV: Instead of a clean-sheet, from-the-ground-up redesign, take the basic bones of the long-in-the-tooth previous-generation vehicle and give it a fresh powertrain, completely revamped styling, and a significant technology-feature upgrade. 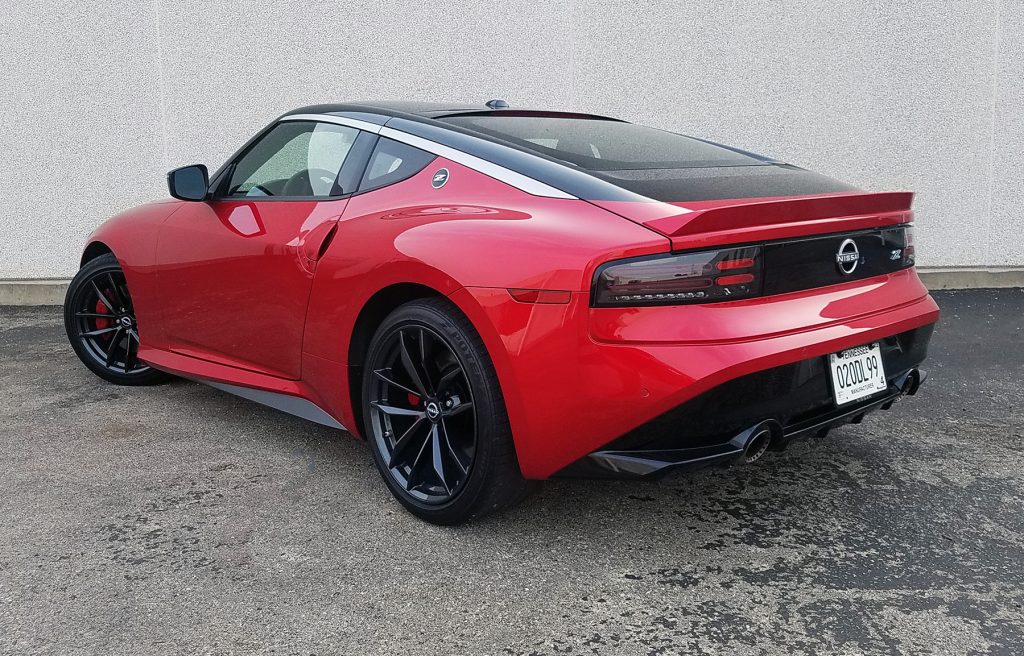 After a two-year break, Nissan’s venerable 2-seat sports car is redesigned for the 2023 model year.

The 2023 Nissan Z was unveiled in show-car form as the Z Proto concept vehicle in mid-September 2020, and the production car’s styling is carried over pretty much intact from the concept. Even though it was widely speculated that the new Z car would be called 400Z, Nissan has elected to do away with numerical prefixes—the name is just “Z” now. The previous-generation Z car, the 370Z, debuted for the 2009 model year and lasted through the 2020 model year with no major revisions. Twelve years on the market is a long time for any vehicle, and by 2020 the 370Z felt well behind the times in terms of technology features and overall refinement. The Z car went on hiatus for the 2021 and 2022 model years, but 2023 Z is scheduled to arrive in dealerships this summer.

To start, the new Z gets a serious horsepower upgrade over its predecessor’s 332-horsepower 3.7-liter V6: It’s powered by a twin-turbo 3.0-liter V6, borrowed from Infiniti’s Q50 and Q60 Red Sport 400 models. This engine puts out 400 horsepower at 6400 rpm and 350 lb-ft of torque from 1600 to 5200 rpm, and offers the choice of a 6-speed manual transmission or a 9-speed automatic. One of our favorite features on the manual-transmission 370Z, the SynchroRev Match downshift rev-matching system, is carried over to the new Z. It automatically blips the throttle on downshifts for a smooth transition between gears, making even novice drivers feel like heel-and-toe pros, and it can be turned off if you’re an experienced driver who wants to heel and toe on your own.

The Z’s all-new dashboard is one of the highlights of the redesign. A configurable 12.3-inch digital gauge cluster is standard, and Performance models come standard with a 9.0-inch infotainment touchscreen with navigation. A trio of analog gauges perched atop the dashboard (see a larger pic in our gallery below) is a nice callback to the Zs of the past.

Nissan nailed it with the Z’s styling. The squared-off grille opening up front was a bit controversial when the Z Proto concept was unveiled, but we think it’s a nice tip of the cap to the original Datsun 240Z. Likewise, the design of the 3D-effect LED taillights deftly recalls the look of the 1990s Nissan 300ZX. (Yep, those ZXs are already old enough to qualify for historic/antique license plates in many states.) In all, this is a wonderful revamp of the Z car’s signature style—a just-right blend of edginess and voluptuousness, with crisp, planed-off edges nicely complementing organic curved shapes. 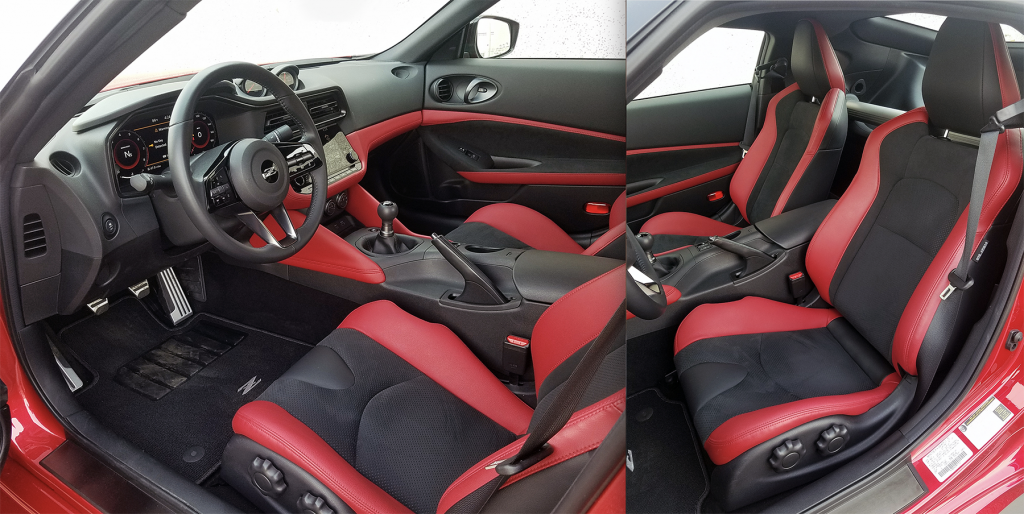 The overall cabin ambiance is much improved over the 370Z, and the available red upholstery accents add further appeal (all-black and striking blue/black interior treatments are also available). The Performance model comes standard with heated power seats that offer a nice blend of comfort and support.

You’ll have to cough up another $10K to step up to the Performance trim, which starts at $49,990, but that money buys lots of upgrades inside and out. Performance models come standard with sport-tuned suspension, upsized disc brakes with red-painted calipers, 19-inch RAYS-brand lightweight forged-aluminum wheels on Bridgestone Potenza S007 high-performance tires, a front chin spoiler, rear spoiler, and heated outside mirrors. Inside, the enhancements include leather/synthetic-suede upholstery, heated power seats, aluminum-trimmed sport pedals, a 9.0-inch infotainment touchscreen with navigation, NissanConnect remote-access services and WiFi hotspot, and a Bose 8-speaker audio system with Active Noise Cancellation and Active Sound Enhancement.

A Proto Spec Special Edition version of the Performance model, trimmed like the Z Proto concept vehicle, is limited to just 240 units in the United States. (That production number is a nod to the original Datsun 240Z.) The Proto Spec starts at $52,990 and wears unique touches such as yellow-colored brake calipers; bronze-colored 19-inch RAYS alloy wheels; and exclusive Proto Spec interior trim, including yellow accents and yellow stitching. On any Z model, there’s no price difference between the manual-transmission and automatic versions, and the destination fee tacks on another $1025 across the board. 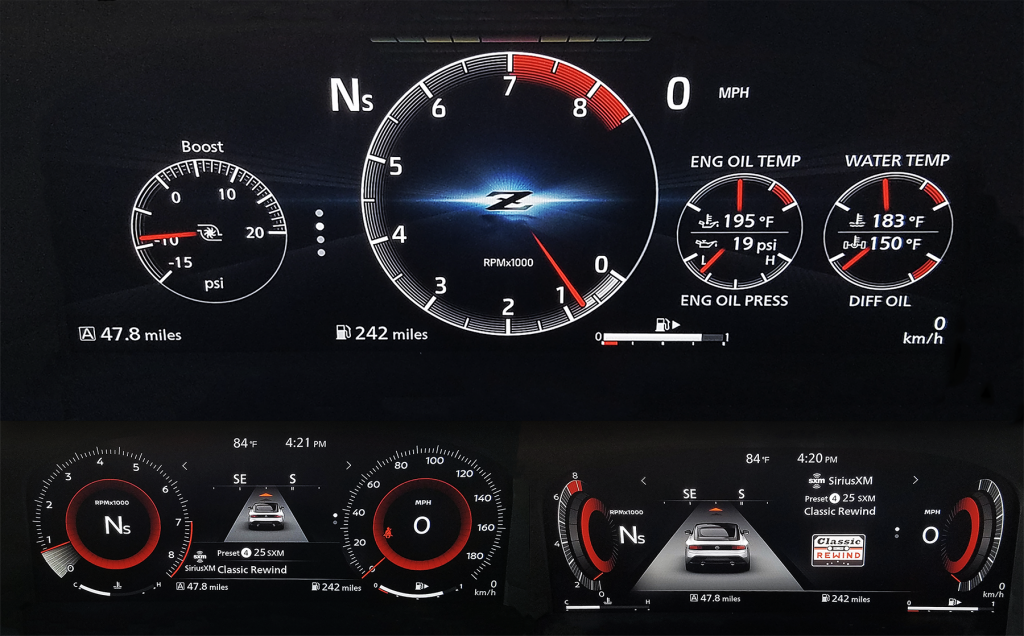 We got to spend a day with a pre-production Performance model outfitted with the 6-speed manual transmission, two-tone Passion Red TriCoat paint with a Super Black roof (a $1695 option), illuminated doorsill kick plates ($500), and floor mats ($400), for a bottom-line price of $53,610 including destination.

Even though their overall passenger- and cargo-room dimensions are essentially identical, the Z’s interior is a big step up from the 370Z’s cockpit in terms of interior materials and technology features. As expected, the cockpit is cozy, but when I adjusted the driver’s seat all the way rearward and adjusted the seatback and tilt/telescopic steering wheel appropriately, my 6’6” frame was able to fit in a relatively comfortable driving position without my head brushing against the headliner—and that’s something I can’t do in, say, a Mazda Miata RF. Forward visibility is fine, the view to the rear not so much—the rakish angle of the fastback rear window means the viewable area of the window from the driver’s seat is quite short. 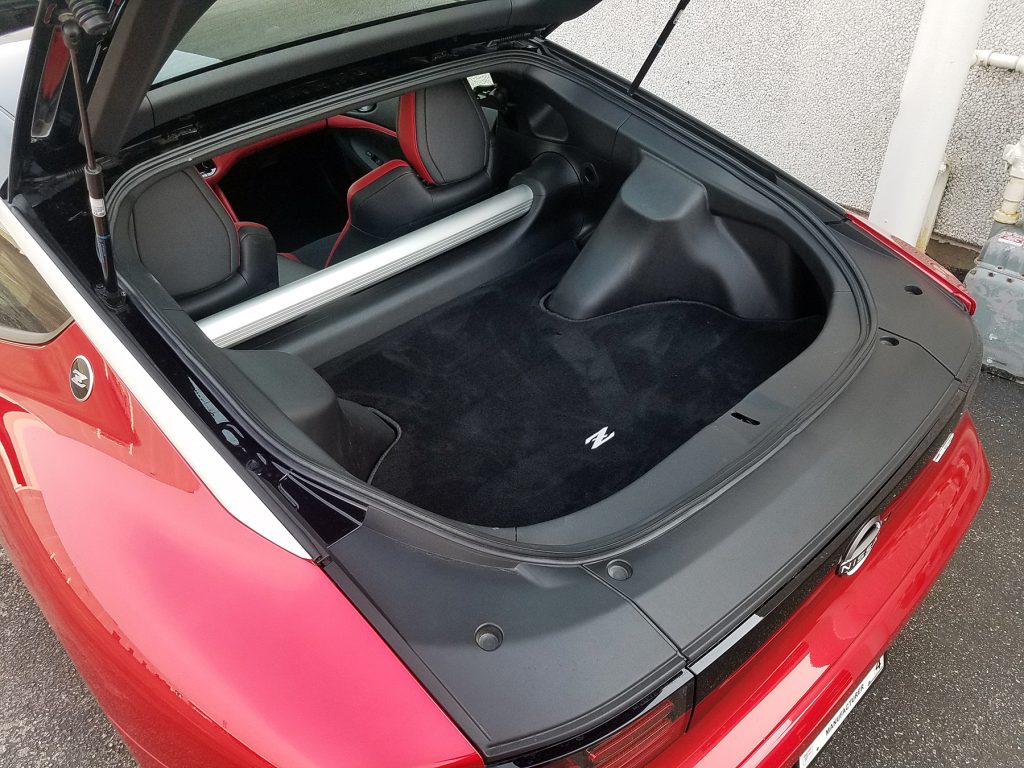 There’s just 6.9 cubic feet of space in the Z’s rear cargo area–just enough for a weekend getaway, and the hatch opening makes the area easy to access.

The rear hatchback allows for easy cargo-area access, but there’s limited space back there. The already-shallow load floor is further compromised by the intruding rear-suspension components and the interior cross bar behind the seats. Still, there’s enough room for a couple small suitcases for a weekend getaway, and my 10-year-old’s hulking baseball backpack and a folding lawn chair both fit with no problems. There are a couple clever small-items-storage solutions that supplement the minuscule glovebox. The owner’s manual nestles into a little compartment with a bottom-hinged cover behind the passenger seat, and there’s a second cupholder hidden under the sliding center armrest (which is also hinged to reveal a really tiny storage bin). A smartphone storage spot (with no wireless-charging capability) is tucked into the leading edge of the center console.

In Performance trim, the Z’s cabin has a decently upscale vibe. There is some low-buck hard plastic hiding out on the center console and the lower areas of the interior, but the leather/synthetic-suede upholstery, leather-wrapped steering wheel and shift knob, soft-touch surfaces, and upholstery stitchwork all do their part to class up the joint. And with its red trim elements, the interior of our tester managed to feel more dynamic than the monotone-black cabins of the recent Toyota Supras we’ve driven.

All Zs are powered by a twin-turbo 3.0-liter V6 engine that puts out 400 horsepower and 350 lb-ft of torque. The uplevel Performance model comes standard with 19-inch lightweight forged aluminum wheels.

The all-new dashboard is highlighted by a 12.3-inch digital gauge display with three display settings: Normal mode features an equally sized analog-style tachometer and speedometer. Sport mode places a large tach in the center of the display (with the 7000-rpm redline located with the virtual needle in the 12-o’-clock position); auxiliary water and oil gauges; and a selectable display that can be toggled between turbo-boost gauge, g-force meter, tire-pressure monitor, or upshift-indicator readouts. Enhanced mode brings “3D” tach and speedo graphics and an icon of the car itself that highlights the lane-keep-assist function and other driver-assistance features.

With 400 horsepower and a curb weight of around 3500 pounds in manual-transmission form, acceleration is obviously brisk. We didn’t have the opportunity to test, but we’d wager the 0-60 times are in the low 4-second range. The twin turbos help supply ample power, but the acceleration is not as linear as in a naturally aspirated engine. The manual transmission’s shifter has a smoother action than the 370Z’s, but there’s still a bit of notchiness and powertrain vibration that make their way through the large shift knob. The clutch pedal’s feel is a bit stiffer and springier than we’d prefer, but we acclimated well enough.

The engine emits a sports-car-appropriate burble at idle. It’s relatively subdued in stop-and-go urban driving, but the exhaust note rises to a satisfying growl in spirited acceleration. On the highway, there’s copious road noise from the Bridgestone tires, along with plenty of wind rush and a fair amount of ambient noise from the open rear cargo area behind the seats.

Our limited time with the Z meant that we weren’t able to get it to any truly curvy driver’s roads with sparse traffic, but it’s clearly a more-than-capable corner carver, and the steering feel is direct, communicative, and nicely weighted. At first blush, the new Z’s suspension tuning felt quite soft and relatively compliant for a sports car, but driving over washboard pavement surfaces or sharp bumps quickly brings out the firmness. Still, this car wouldn’t be punishing in daily-driver duty; our guess is that Nissan engineers have left themselves some room to go more aggressive with the suspension tuning on a possible NISMO Z variant in the future. 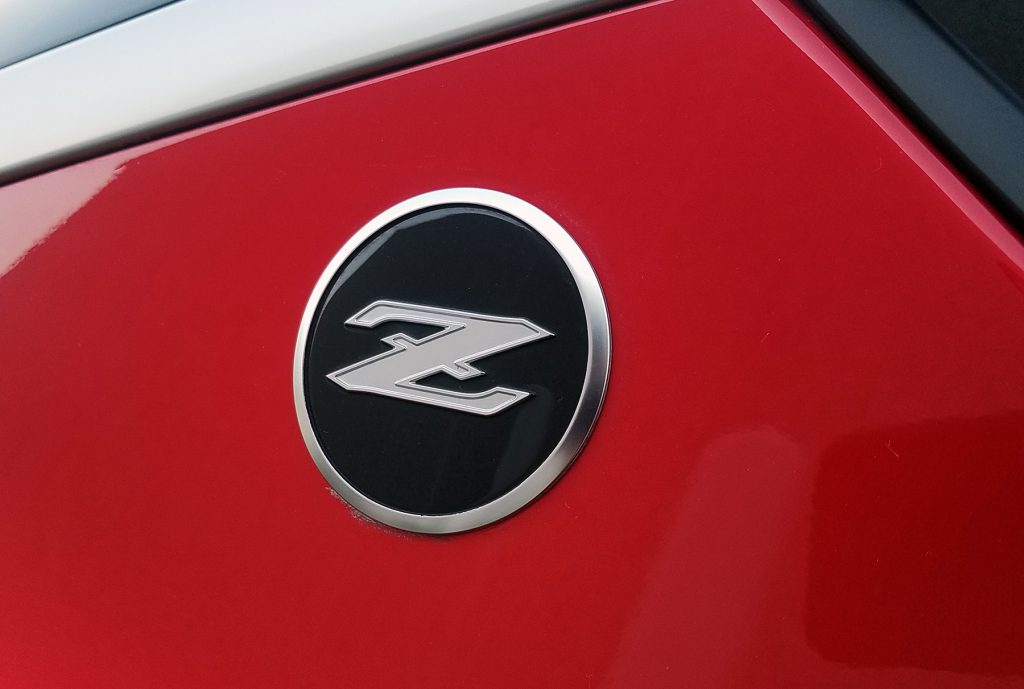 We didn’t have a chance to measure fuel economy, but the Z’s EPA numbers aren’t anything to write home about. Manual-transmission models are rated at 18 mpg city/24 highway/20 combined; automatics do a bit better at 19/28/22.

And that brings us to the Z’s most direct competitor, the Toyota Supra. The Supra shares the bulk of its underpinnings, including its 382-hp turbo 3.0-liter 6-cylinder and 255-hp turbo 2.0-liter 4-cylinder powertrains, with the BMW Z4 roadster. Up until now, the Supra didn’t offer a manual transmission, but for 2023 a 6-speed manual gearbox will be available as an option to the standard 8-speed automatic on 3.0 models (the Supra 2.0 will continue to offer only the automatic). EPA estimates for the 2023 Toyota Supra transmission haven’t been released yet, but the automatic-transmission 2022 Supra 3.0 is rated at 22 mpg city/30 highway/25 combined—that’s 2-3 mpg better than an automatic Nissan Z.

The Z and the Supra 3.0 are fairly close in weight—the Supra is about 100-200 pounds lighter, depending on transmission choice and trim level. And despite its slight horsepower deficit, the Supra 3.0 should be a shade quicker than the Z—most of its published 0-60-mph times are just under 4 seconds. It’s also more expensive: The Supra 3.0 Premium is about five grand pricier than the Z Performance, and even the base Supra 2.0 is about $3500 more than a Z Sport. Some purist enthusiasts aren’t crazy about the Supra’s co-mingled lineage either; the Z has a pure-Japanese bloodline.

Our advice? Test drive them both. We’re happy that in today’s challenging market for traditional manual-transmission sports cars, Nissan chose to stick with the Z, and came up with a vehicle that continues to invigorate—and feels fresh and up-to-date. 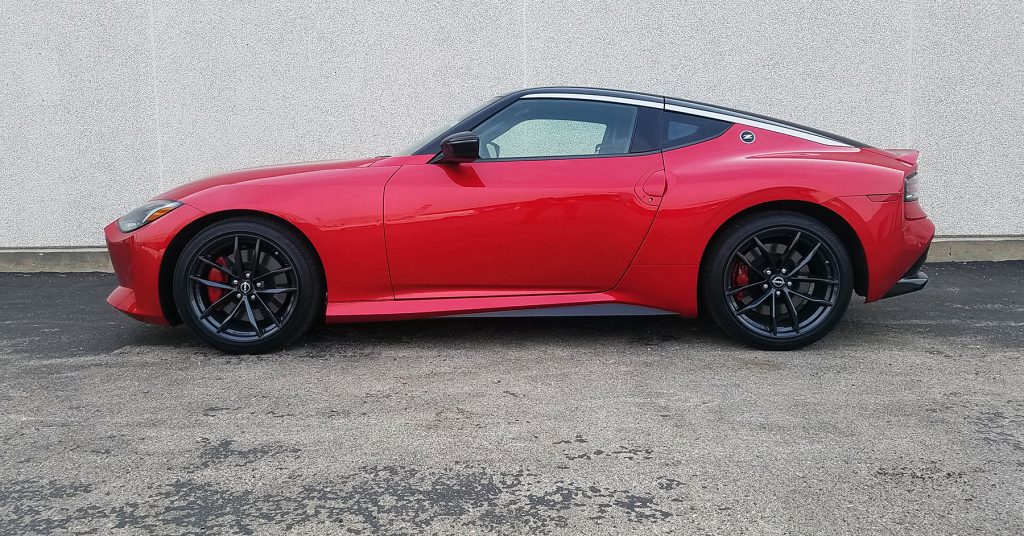 Two-seat sports cars aren’t near as popular as they used to be, but Nissan’s revamped-for-2023 Z makes a strong case for the breed. It brings modern technology elements and respectable practicality to the traditional sports-car concept.