This is a 1982 Chevrolet Corvette that’s been fitted with a Greenwood Daytona bodykit, a rare and highly sought after modification developed by race-winning specialists John and Burt Greenwood.

The Daytona was the most extreme of the Greenwood Corvettes, the bodykit significantly widened and lengthened the original car. There was a strong focus on improving high-speed aerodynamics based on the years of racing experience of the Greenwood brothers.

The Greenwood Corvettes have been affectionately known as the “Street Sharks,” likely due to their wild styling. 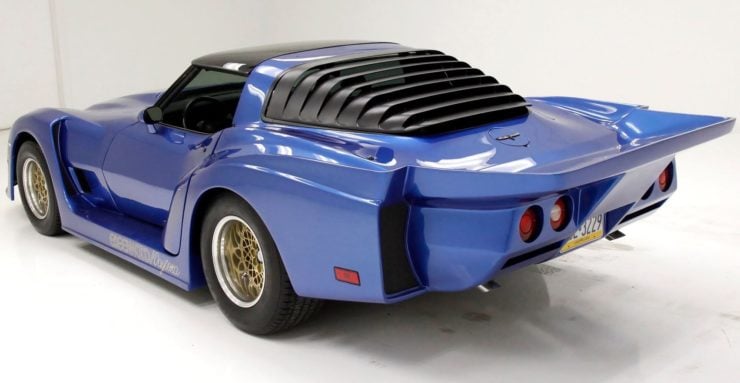 Looking at the profile of the Greenwood Daytona, it’s not hard to see why it was nicknamed the “Street Shark” by some.

The model family consisted of five cars in total, all were built between 1975 and 1981, though many were built after this time using officially licensed bodykits manufactured by Eckler’s of Titusville, Florida.

The primary Greenwood Corvette models were the GT / Sebring GT, the Sportwagon, the Turbo GT, the Daytona, and the GTO.

The Eckler’s Can Am was closely inspired by the Greenwood Corvettes and it was built by Ralph Eckler who licensed the rights to make and sell the bodykits, so it’s often included as a Greenwood Corvette even though it technically isn’t.

Today the surviving Greenwood built Corvettes are highly collectible, one of them is even in the National Corvette Museum in Bowling Green, Kentucky. The Corvettes that were given Greenwood bodykits made by Ralph Eckler are also highly desirable, and they tend to be notably less expensive.

The Greenwood Daytona was the most extreme of all the Greenwood Corvettes, it’s characterized by an outlandish fiberglass body kit that includes a new nose section, hood, sides, and rear, with a large spoiler on the back for high-speed downforce. 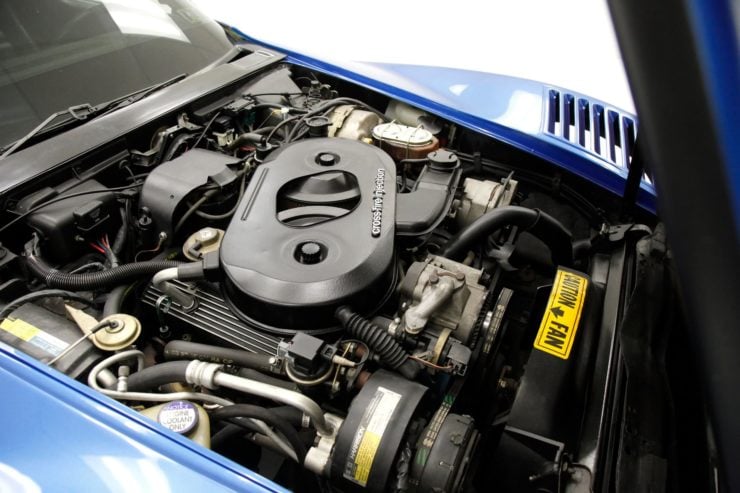 This vehicle is fitted with a numbers-matching 350 cubic inch V8 with Crossfire fuel injection, mated to a 700R4 4-speed automatic transmission.

The body panels of the Greenwood Daytona were manufactured using a Greenwood design by Ralph Eckler. They were originally tested on a 1980 Corvette that had been supplied by Tico & René Racing, the body was designed to be functional not just visual.

The lower nose reduced drag, the huge rear spoiler improved downforce, the air inlets in front of both rear wheels helped cool the rear brakes, and the vents above the front fenders helped suck out hot air from the wheel wells.

All of the Daytonas built by Greenwood were fitted with turbos, using a a Turbo International draw-through arrangement. Two of them received the Greenwood rear five-link suspension with coilover shock absorbers and the others kept the stock independent rear end.

Heavier anti-roll bars were added to all of the Daytonas, along with three piece BBS wheels, and Kevlar brake cooling fans.

When ordering your Greenwood Daytona new the cost could range from $37,000 to $53,000 USD, over triple the price of a standard Corvette. As a result just five were sold in total, with a small number being made later using the official bodykits from Eckler. 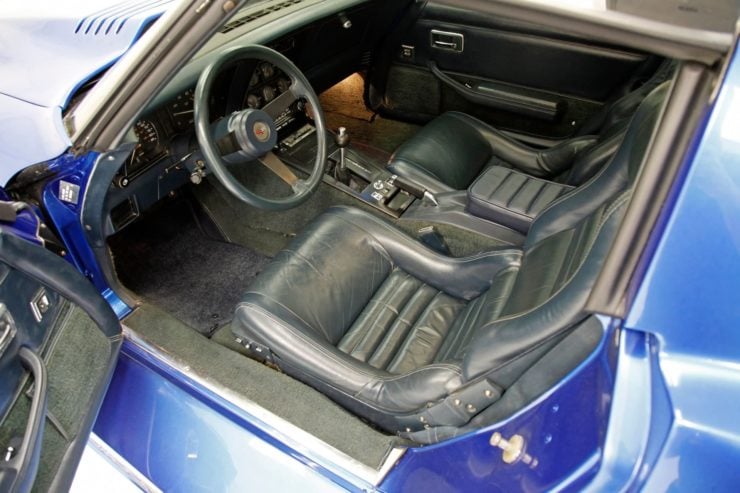 The interior remains original, the tops of the seats quickly fold down to place things into the rear trunk section – which is only accessible via the inside.

These Eckler cars typically didn’t have the turbocharged engines or tricked out rear suspension, though owners were known to apply various suspension, brake, and engine modifications of their own.

There has been some debate within the Corvette community about what to call the cars fitted with authentic Greenwood bodykits that weren’t built by Greenwood themselves, some believe they should be given the Greenwood title and some don’t.

The car you see here is one of the later Greenwood Daytona-bodied Corvettes built using the official Eckler bodykit from Florida. This is the same bodykit used on the cars built by the Greenwood brothers.

This Daytona is finished in blue, it’s fitted with BBS “basketweave” wheels, and it has matching gold “Greenwood Daytona” decals on the sides, with the black louvres on the rear, and of course, that signature rear spoiler.

The seller notes that this car benefits from a restoration by Masterworks Corvette Restoration and it’s showing 23,996 miles on the odometer. Power is provided by a numbers-matching 350 cubic inch V8 with Crossfire fuel injection, mated to a 700R4 4-speed automatic transmission.

It’s being sold out of Morgantown, Pennsylvania with bidding currently active, the Buy It Now price is $42,900 USD. If you’d like to read more or register to bid you can visit the listing here. 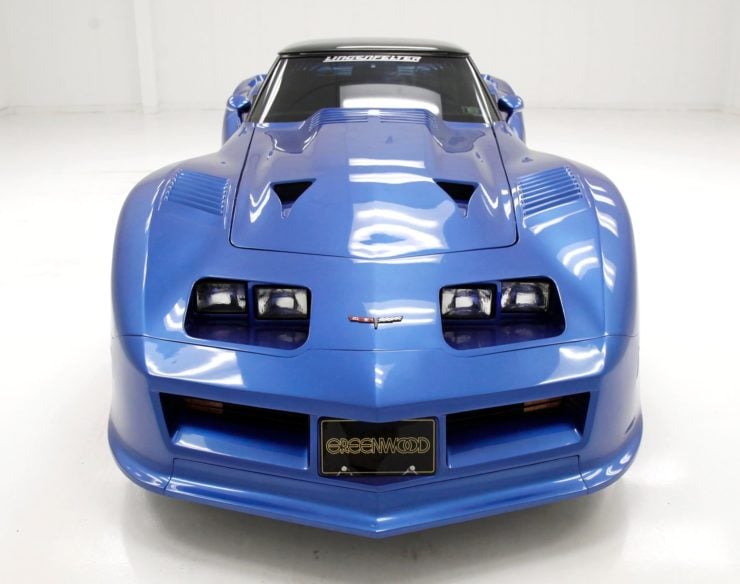 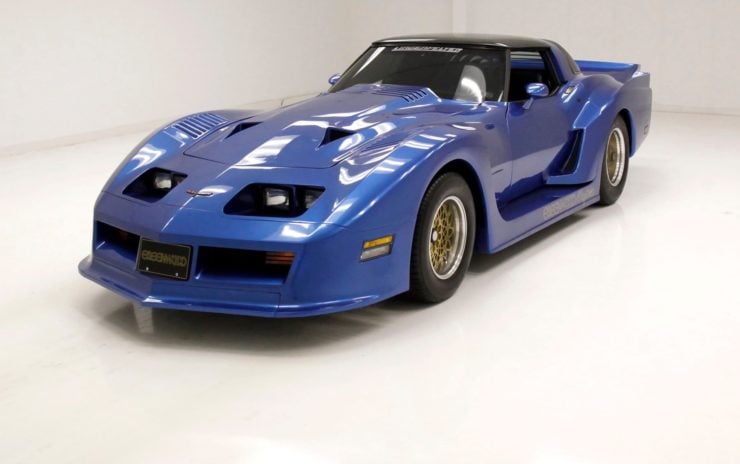 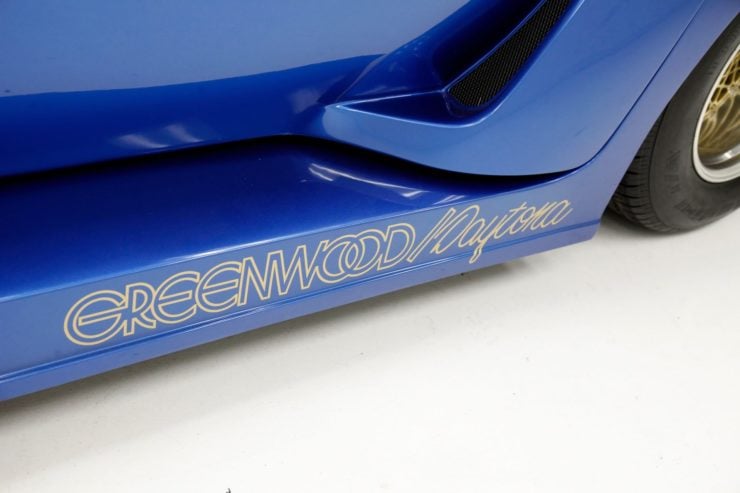 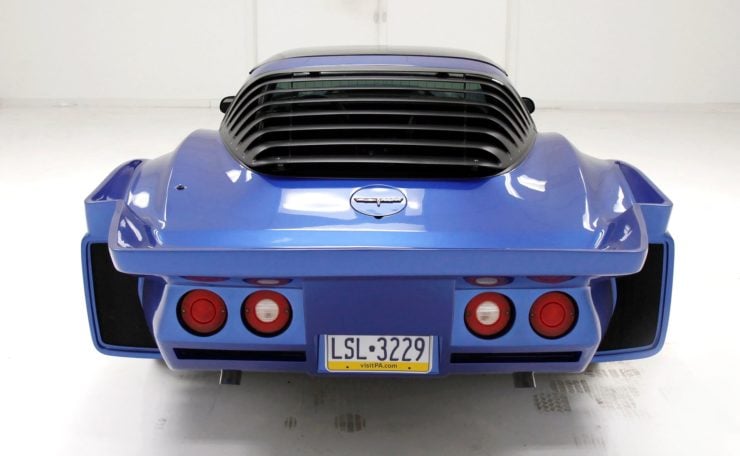 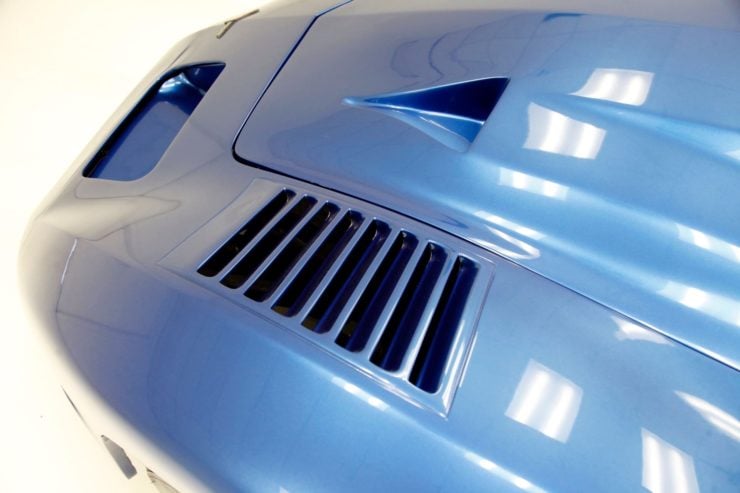 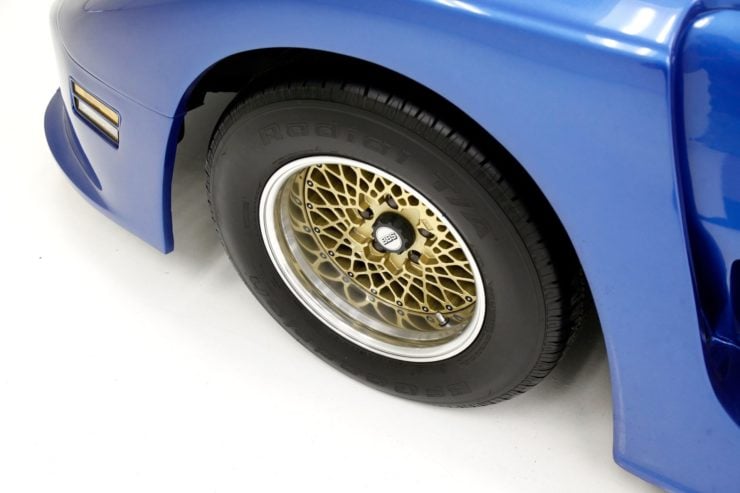 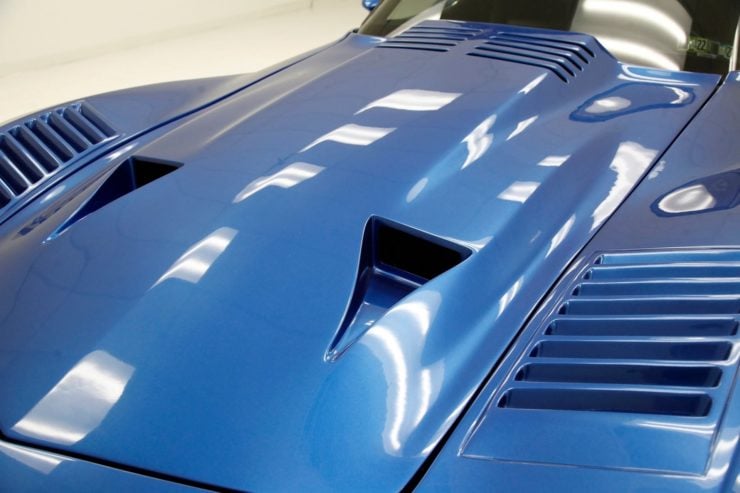 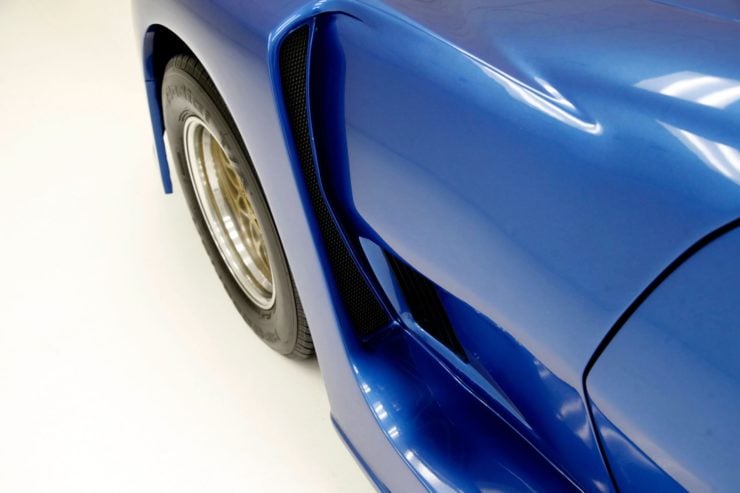 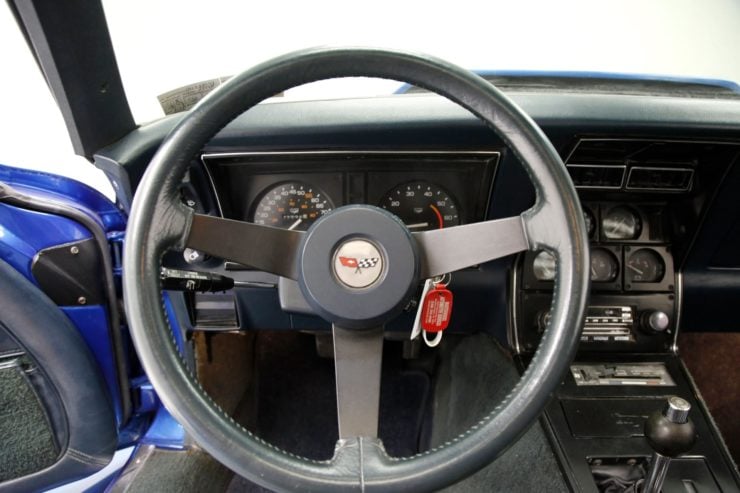 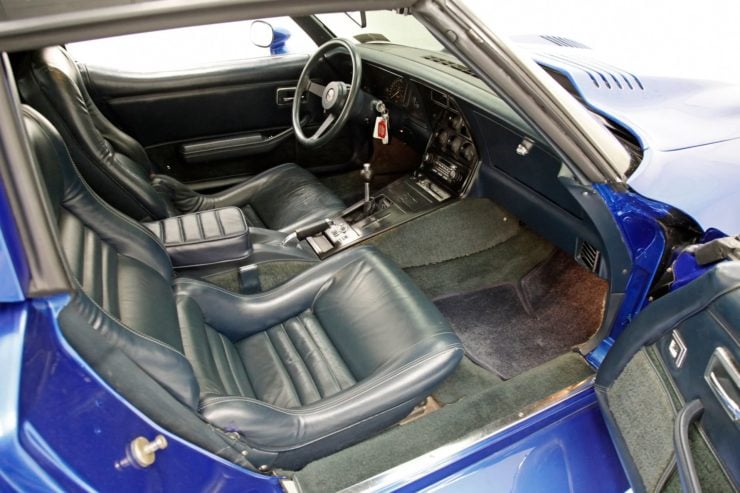 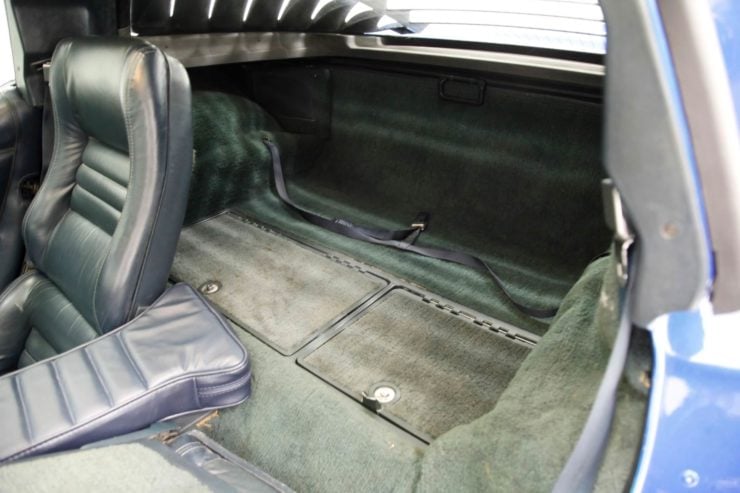 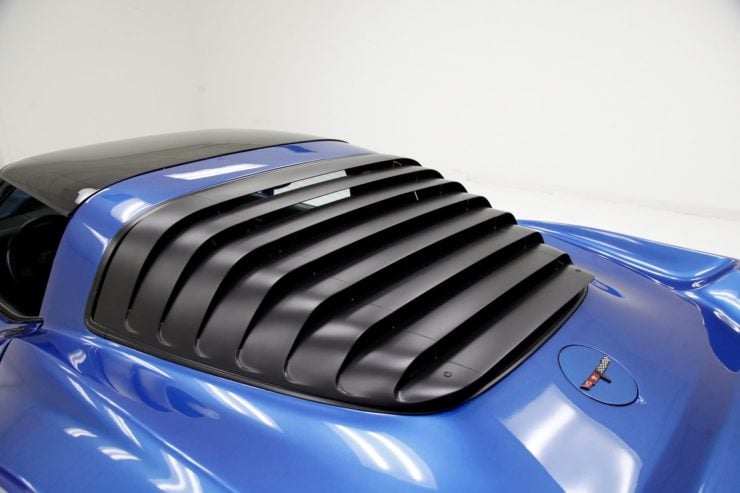 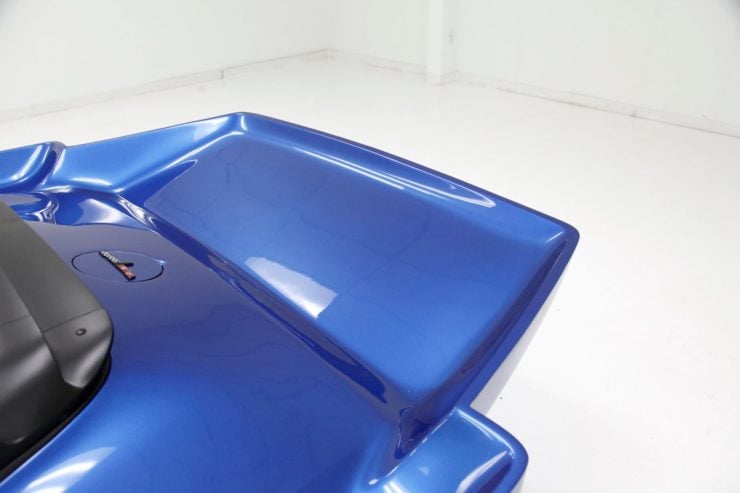