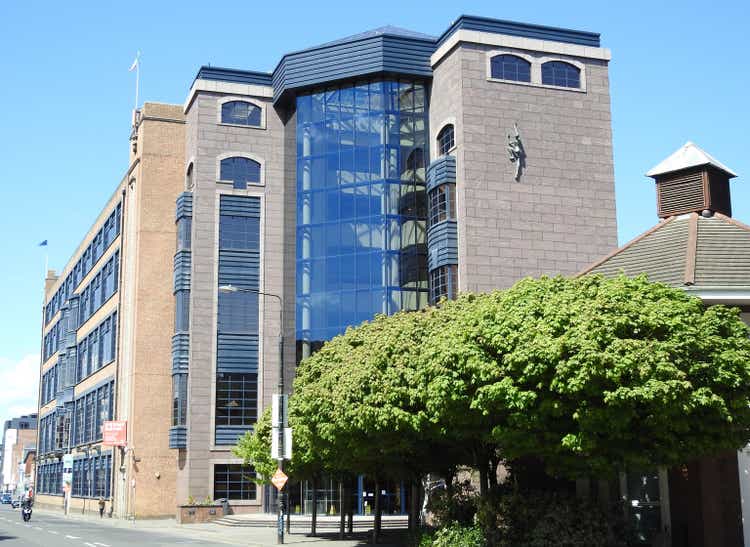 
Real estate triple net lease originator W.P. Carey (NYSE:WPC) has once again busted through my fair value estimate which brought its inclusion in the Portfolio Income Solutions portfolio up for review. Given the price gains, has WPC gotten expensive or have the fundamentals kept up?

Our review of the fundamentals revealed a few developments that indicate WPC’s fair value has grown and it remains opportunistic. WPC has consistently traded at a discounted multiple due to its AUM based earnings but with the CPA-18 merger underway, it is going to be a real estate pure-play which unlocks a real estate multiple. Specifically, I believe fair value is now ~$92

WPC has long been an asset manager in which they raise capital for non-traded REITs and earn AUM income for the REIT by managing these vehicles. Since these non-traded vehicles are illiquid, they eventually need an exit event so the investors can once again access their capital.

This exit event has usually been absorbing them into the public REIT and this one is no different. WPC will buy CPA-18 with an expected completion date in 3Q22.

Despite a history of so many of these absorptions that has resulted in WPC’s excellent long term shareholder returns, the market tends to throw a fit when they happen. The etiology of the market’s displeasure is that these mergers are often not immediately accretive. The buyout of CPA-18 will also be negative accretion as it will result in a reduction to AFFO/share.

Allow me to walk through the reasoning on why despite this dilution it is both correct for WPC to engage in the buyout and long term beneficial to WPC shareholders.

Reason why WPC is correct to buy CPA-18

The purchase itself is accretive to earnings. It merely becomes dilutive because due to the exit event the flow of AUM fee income will stop. Since the exit is a preplanned event, the flow of AUM fees will stop whether or not WPC buys it. If WPC does not buy it there will be some other exit event such as a different company buying it which would also likely result in a cessation of the AUM fee income.

Since the cessation of AUM fee income from this vehicle will happen regardless of whether or not WPC buys CPA-18, the loss of fee income should not be factored into how the decision is judged.

Once we set aside the fee income portion of the equation I think the purchase is quite clearly good for WPC. The price appears to be fair market value of the real estate which would make it a present value neutral purchase for most buyers, but significantly better for WPC because it can manage that portfolio cheaply. The portfolio of assets overlaps nicely with WPC’s existing portfolio such that minimal incremental expense will occur at the property level and essentially zero incremental expense will be incurred at the executive level.

This elimination of opex that would be factored into NOI for a normal buyer makes the cap rate functionally much higher for WPC. Thus, I think it is a wise purchase.

The rest of this article will essentially be about valuation such that we can establish a new fair value estimate for WPC. One of the factors influencing a REIT’s multiple is risk and here WPC scores quite nicely.

WPC is a large REIT at an enterprise value above $22B. It has solid debt metrics with Debt/EBITDA of 5.7X and 30.6% debt to EV. This places it firmly in investment grade territory at BBB.

It has enhanced income visibility with a weighted average remaining lease term of 10.8 years and some built in growth with CPI linked escalators on about half of its rental income. With hundreds of tenants and 1304 net leased properties, no single tenant or property issue can significantly derail earnings.

It further has reduced risk from inflation both from the aforementioned CPI linked escalators and long term debt locked in at fixed rates. Their debt is shown below:

In examining WPC’s outstanding debt, two things are of interest:

All of the above factors would lean toward WPC being valued at a premium to the REIT index. Its structure, size, balance sheet, visibility of cashflows, and Euro debt are all superior to the average REIT.

There is, however, an offsetting force that suggests WPC should perhaps trade at a lower multiple. While its triple net nature contributes to the aforementioned stability factors, it also moderates growth as the REIT has to wait for leases to come due to have the opportunity to raise rents.

That said, WPC is still growing with consensus estimates calling for FFO and AFFO to grow consistently over the next few years.

The source of growth is a combination of accretion for acquisitions and contractual escalators. WPC has surprised to the upside recently on acquisition volume with better than market cap rates so there is some potential to beat the analyst estimate slightly.

All that said, this is a bit below normal growth given WPC’s property types.

Office isn’t growing much, but industrial and retail are. Given that industrial is 49% of the property mix and most industrial REITs are growing at blazing speed, WPC’s growth is a fair bit slower than its property sector peer set.

There are a couple adjustments of note to the quality of WPC’s earnings/growth compared to those of underlying property sector peers. On the favorable side, WPC’s capex burden is remarkably low with capex inclusive of maintenance Tenant Improvement (TI) and Leasing Commissions (LC) of $7.7 million in most recent quarter against $370 million total revenue.

That is about 2% while office can run as high as 20% and even industrial is in the mid single digits.

The low capex burden comes from the triple net nature of the leases and the really long lease terms. The flip side of this is that while Prologis (PLD) is out there increasing its rents by 40% on a large portion of lease that come due each year, WPC has to wait for contracts to expire. With only 1.3% of rent expiring in 2022 and 3.5% in 2023, WPC’s organic rent will largely just be the escalator.

Thus, in assigning a multiple to WPC it is a matter of weighing the more moderate growth against the upside of the enhanced stability and visibility.

Let us begin by finding what the average multiple would be for these property types. Sector multiples are as follows

Given WPC’s weights its default multiple would be 22X forward FFO using a straight sumproduct formula.

I assigned a low multiple to the other category because while it includes very high multiple properties like life science labs, it also has some junk like hotels. Given the possibility of a company to hide their bad properties in the “other” category, I believed it prudent to give it a particularly low multiple.

It is tempting to factor in WPC’s high quality as an additional item influencing the multiple, but its quality is already contributing to the lower risk and the growth.

The fair value of W.P. Carey

With all these factors in mind I think WPC should trade at about 18X forward FFO. This is a 4-turn discount to its property type multiple due to its lesser participation in the industrial boom style growth.

This multiple is also backed up by a comparison to large cap triple net peers as O and ADC both trade right around 18X. I would tend to favor WPC over either of those as I do think its industrial properties will eventually outgrow the retail of the peers.

18X forward FFO would translate to a market price of about $92.50 which is about 10% upside from current levels. As WPC’s fee portion of revenue has declined its multiple has increased. With close to 100% of revenues now being real estate, its move up to fair multiple is finally unlocked.

There could be some near term weakness in market price as new guidance comes out reflecting the loss of the fee income from CPA-18.

If the market digs deep to understand the long term accretive nature of the overall acquisition it will not dip, but if the market myopically looks at near term AFFO, it could dip on that guidance release. Your guess is as good as mine as to the market’s reaction function on any given day.

It is possible there will be a play to pick it up cheaper later, but given the high dividend yield of WPC, discount to fair value and fundamental strength I am happy to own it today.